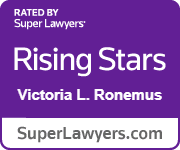 Victoria practices in the area of medical malpractice defense, general liability defense and construction site accident matters. Victoria represents hospitals, doctors, nurses, and other health care professionals throughout litigation, including defending depositions and preparing for trial. She also defends building owners and management companies in premises liability matters, as well as contractors in New York Labor Law actions. She ardently defends her clients from the inception of the case, through discovery and including trial.

Prior to joining Fullerton Beck Victoria worked at a defense firm in its medical malpractice and general liability divisions.  She  has lectured the New York State Bar Continuing Legal Education courses on topics of Assumption of the Risk, as well as Strategy of Taking a Deposition –State Court verse Federal Court Victoria received a BA from Binghamton University in 2006 and her JD from New York Law School in 2011. She is admitted to practice in New York, as well as in the US District Court for the Southern District of New York..

Victoria has been selected for inclusion in New York Metro Super Lawyers Rising Stars in the area of Medical Malpractice since 2018.

In a case of first impression in the Appellate Division, First Department, Fullerton Beck LLP attorneys successfully argued for the...