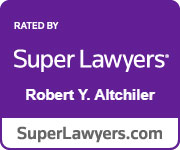 Robert has held several teaching positions throughout his career, including currently serving as an adjunct law professor in trial advocacy at Pace University Law School, a position he has held since 1998. He also repeatedly participated and lectured at Cardozo Law School’s Intensive Trial Advocacy Program and taught at Yale Law School and the EATES Program at Stetson University Law School, a program designed to teach trial advocacy professors how to better teach their students.

Robert has appeared on Fox, Court TV, and Tru TV as a legal commentator.

Robert earned his J.D. from George Washington University School of Law and has participated in the National Institute for Trial Advocacy’s Harvard Teacher Training Program and the National Criminal Defense College.

Robert is admitted to practice in New York and in the United States District Courts for the Southern and Eastern Districts of New York and the District of Connecticut.